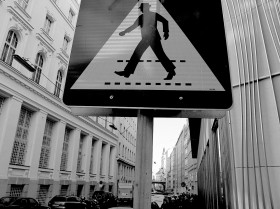 After last night’s show I met an old friend who now lives in nearby Bratislava. He told me of a frightening fascist march he had recently witnessed in a financially crippled Hungary. He said they were chillingly organised and disciplined. The allure of order in a tumultuous world. We like to think in Britain we’re too messy to ever embrace such mechanised ideology, too wayward. I remember a local Pakistani newsagent asking, as I bought an issue of Private Eye sporting a Nick Griffin halloween mask, if the fascists would ever have power in Scotland. I laughed and said I thought they were too comical. But I knew that was glib. I don’t think it’s them we must be wary of; I think it’s ourselves.

Back across the border we fly over the Danube a third time and cut north to Nuremberg. The gig is in a small town on the outskirts – a bit like Lanark, in fact.  The venue itself is situated in a hinterland between an enormous Cash & Carry and a multi-storey car-park. It’s some kind of arts centre, I’m really not sure. I plug in my shit and play my half-hour and fuck off, like a sad half-hearted cattle raid executed on a mule, armed with a pillow and a paint gun.