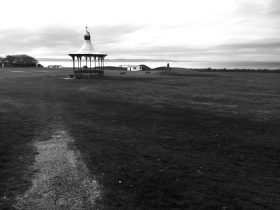 I’m driving northeast to Nairn, where I am appearing as an unannounced guest at their beer festival. It’s a pub gig with the world’s best pub band – no rehearsals, just count in, play and meet at the end. When I arrive at the Braeval Hotel there is already a crowd milling around outside in the warm May evening, jocular and ruddy with two days of beer drinking behind them. Gordon, the hotel’s tirelessly accommodating proprietor, tells me it was so busy yesterday that the local streets were impassable. How he and his wife Morag cope with all this while maintaining customer friendly smiles is beyond me.
I check into my attic room which looks out over the wide sandy bay and pull on my professional clobber, having been wearing shorts for the drive. It doesn’t do to slum it amongst one’s public. People talk. Our drummer tonight, the wonderful Ted…—More Tales 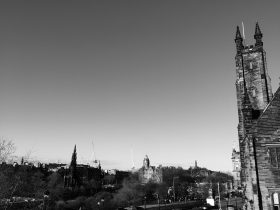 I’m playing a “songwriter-in-the-round” charity event in Edinburgh with Ricky Ross, Karine Polwart and old friend Gary Clark. It’s taking place in the oval Georgian recital room that is St. Celia’s Hall, now part of the Music Museum with its virginals, spinets and harpsichords sitting around at every turn. There’s an ancient little pipe organ powered by a foot pump at the head of the room. This is all quite posh and interesting. We meet up, soundcheck and have a little rehearsal of our finale before I duck outside to take a gander round the capital gleaming in the evening sunlight, angling madly everywhere, making sudden shadows at corners, blinding you as you cross an intersection. I drift up the Royal Mile, past the countless cashmere and shortbread shops, to the castle esplanade where Dels Utd play in July. I look out over the Firth of Forth, with its steely…—More Tales