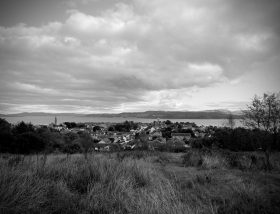 To Dunoon and Oban

A few powder puff clouds hang in a limpid sky and a raptor sails over the first of the fields as we leave Perth. We voted to take the scenic detour today, twenty minutes slower but avoiding motorways and Glasgow. The first part is a road I’ve rarely driven and there are some weird village names; Madderty, Innerpeffray, Fowlis Wester. Three young deer nose at the yellow stubble at the edge of a wood and the road winds and ululates through deciduous copses, motley foliage radiant in the October sun. We snake through the picturesque old cattle (later spa) town of Crieff, all mature trees and rustic Victorian sandstone. We come to the very pretty village of Comrie and weave out into more rugged hill country, the rocky tops fringed with brown heather, to reach the eastern end of Loch Earn marking the edge of the leafy Trossachs. The loch sparkles sky blue, silver and peaty brown, mirroring  the beauty of the upper world, shielding secrets beneath.

At Crianlarich we turn south. These are the Southern Highlands much traversed by Andy and I on hill walks over the decades and very familiar. The English guys in the front seats ooh and aah as we drive through the mountain pass at Rest and Be Thankful in the Arrochar Alps, the walls of autumnal yellows and browns a rhapsody to the eye in the sideways light. The Dunoon road down the Cowal peninsula is gorgeous, skimming the lovely Loch Eck in a glen so perfectly proportioned it could have been designed by God, but geological forces have done a better job than God could ever manage.

I get away from the venue prior to soundcheck and hike up the little ridge behind the town, skirting around its edge on a grassy path among gorse and bracken to a waterfall in the woods. The sunshine ripples through the trees like music from a far-off bar. Before the show I meet a couple of old friends and take a walk around the West Bay, the lights of Wemyss Bay and distant Largs twinkling across the tranquil water. We muse about how Covid has changed our habits and forced us outdoors when socialising, how walking lends conversations a different rhythm. I find it easier than face-to-face exchanges, never knowing when to break eye contact or whether I look shifty when I do.

The show is perhaps less rowdy than expected for a Friday night with a bar along one side of the room but we do our thing reasonably proficiently and most faces are smiling by the end. Call it 2-1 with a flukey goal in the 89th minute. Six shows in a row is more taxing in one’s fifties than one’s thirties and my energy levels felt weirdly low during the gig. I’m sure the crew, with their much longer days, are feeling it. Our sound man, Dave has a pustule on his eyelid the size of his thumb. He has ointment, apparently.

Another day in rural Scotland, another ridiculously scenic drive, today around pretty Inveraray with its white lochside facade and up to beautiful Loch Awe and the high mountains of the Western Highlands. Then under Connel Bridge at the bottom of Loch Etive and round the sea loch coast to descend the steep pass into the quaint harbour of Oban. I take a gander round the waterfront and the high street behind but I’m in no mood for the holiday crowd — besides the light has flattened and there’s a sharp bite to the air. The dressing room is cold and resembles a tiny, dilapidated squash court so I hang in the catering room which is a theatre space with the raked seating stowed away at one end. It’s nice to be among the crew for a few hours and I watch their casual interaction and take comfort from it. They have tour bus camaraderie.

We all suffer a bizarre stage sound, finding it hard to pitch in a maelstrom of rogue low end frequencies caused by FOH Dave trying to push the volume of the PA over the chatter of the crowd at the bar behind him. But we do a few things well and there are some nice moments among the sonic madness. We hurry our exit as we have a three hour aftershow drive. We wind south in the darkness and park ourselves in some hotel beds for a few hours before continuing to Birmingham in the morning. I open my blackout curtains to see the buildings of a business district bathed in grey steam. Everything is grey — the windows are grey, the concrete is grey, the rain is grey. We make our way onto the adjacent motorway and carve south again, out of the woods and into the tangled roots of the industrial world. Nothing ahead but cars and trucks, hemmed by white stitches, forging on through the mist, driving to anywhere but here.

7 Responses to “To Dunoon and Oban”