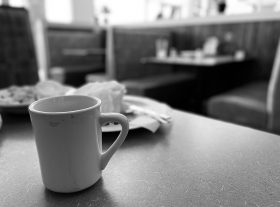 Burly workmen carry me from my station to a high wall where, in a horrifying initiation ceremony, they mount me onto metal brackets, my back facing out to a grinning crowd. I crane my neck to see the first nail getting hammered into my left hand and am awoken by my fists pounding the roof of my bunk in an attempt to escape. It’s 11AM in Nowhere, west of Somewhere and I peer out of the front lounge windows to see low wooded hills, a highway embankment and a big garden centre car park full of pick-up trucks. Presumably (and this is a novelty) picking up stuff you need a pick-up truck for — like earth or a bush. I head out in the warm sunshine, meeting Andy coming down the slope. He’s seen a snake. I gingerly pick my way up the highway verge amongst the detritus of the road to a junction I am just about able to cross by watching the traffic lights suspended above and making a mad dash for it. I find a “Greek” restaurant who ply me with coffee and a chicken sub. It’s a rural vibe, very local, fairly friendly. You probably wouldn’t want to get into a discussion about defunding the police but I’m sure these folk would have interesting stuff to say about climate change and energy prices. There was snow a couple of days ago. Today it’s 30 degrees. The speaker above plays Queen, Lynyrd Skynyrd, REM. You know, pop chart rock, nothing too troublingly recent — like from the last twenty five years. There are three large landscapes on the wall, two of little Greek white villages on the blue, blue Aegean and one, oddly, of the pyramids at Giza. On the the facing wall there’s a long frieze of hieroglyphs. Ok, let’s just go with an ancient world theme. Some of the men here are big. I mean tall, heavy, strong-as-oaks big. Guys you’d want around you in a barn fire or a stampede. Or a mine collapse. The man at the register doesn’t look Greek so I hazard a guess that he’s Egyptian. I tell him I was there in 1988 and loved it. This is a bit of a gloss but it’s nice to be nice. He seems impressed that I visited three different towns. One point for diplomacy. I walk across the humongous parking lot to an enormous Walmart. Absolutely no fucker in this interplanetary warehouse of a space is wearing a mask. I meet Brian, who is pushing an empty trolley around the place purely for something to do. The temptation to just get completely smashed is powerful and dangerously justifiable. I pop into a Goodwill where the items, regardless of category, are obsessively hung according to colour. I finger some cloth in the green aisle but I’m cruising in neutral, just dreaming the day by. I head back to the hotel and on a slip road verge I nearly tread on a large shiny black snake who is sunning herself into torpor. I wonder if it’s the same one Andy saw. A big black moth flutters past looking too heavy for flight. The animals are coming alive.

A Starfucks I pass is drive-thru only so I’m forced through the piss-coloured arches for coffee. It’s my first visit to McDonald’s since 2014 when I walked out because they wouldn’t sell me a veg burger without a fizzy drink. Here I place my order on a big narrow screen, a bit like a digital hymn board, receive a numbered ticket, proceed to a till to pay whereupon I’m issued with a second numbered ticket and told to wait in line. If this is free market capitalism at its most refined it sure does resemble Soviet state bureaucracy. I imagine it’s easier getting a parking permit in the People’s Republic of China. Maybe a longer wait though. I sip my vile, cheap black coffee on a concrete picnic table set into the roadside grass when a massive articulated truck stops on the curved bit of road in front of me. A fat trucker gets out, spits and looks about before climbing back aboard and doing an enormous U-turn, ploughing up a good chunk of roadside turf as he does so. Get out, look cursorily about and fuck off leaving the place much worse than you found it. The human race in a cocked hat. How long before there’s a landfill pit on the moon?