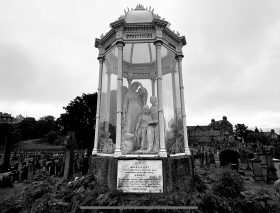 I was going to start this sentence with the word “so” but I caught myself just in time. So I started it with “I” instead. And that’s as it should be. We jump out of the van at quarter to four and the dressing room is so unpleasant I immediately strike out in the June drizzle, walking a scenic path uphill towards the castle through tall mature trees where I am cawed at by a crow, accosted by a female blackbird, peered at by a squirrel and surprised by couple of rabbits. It’s like the start of a children’s book. I reach the old graveyard near the summit and remember being here in the 1980s but for what reason I can no longer fathom. Just a jolly, possibly. I recognise a weird marble statue of an angel and children encased in a bell of glass. It’s the Martyrs Monument according to the website. It’s creepy and vulgar, like light entertainment.

After the check I go out hunting for scran and settle on a Greek place which looks basic and locally owned and delivers on that promise. The tinny bell of a nearby church rings six o’clock and I take its cue to leave. I tramp uphill in the murk through pretty winding cobbled streets stopping under a tree to get out of the rain beside a little bagpipes shop. As I climb the last bend before the castle plateau a crowd of sodden tourists comes round the corner led by a piper in full regalia, honking away at his chanter with vigour. It’s Scottish to the max. I enter the graveyard from the opposite side from earlier as the rain eases and the birdsong rises. The cloud lifts a little and the Wallace Monument appears like an old-fashioned idea of a rocket ship poking out of a rich green thicket. Before I descend I park on an iron bench and listen to pigeons clearing their throats as the leaves drip themselves dry. I can hear the main road below washing back and forth and in between the cosmos of pinpricks that is summer birdsong hangs in the air like a veil of contentment.