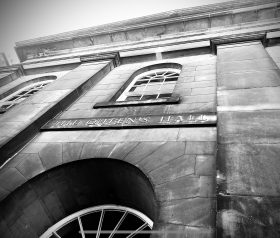 There are white clouds scattered above and the roadside trees throw pretty shadows on the gleaming tarmac. We sit at sixty in the inside lane pulled along by the lorries ahead. Iain and I visited Edinburgh a week ago to busk on a couple of radio shows and took a wander through town, the festival crowds refreshingly thin. There were the usual magicians, jugglers and carnival barkers drawing pools of onlookers and hungry-eyed flyer pushers soliciting attention but the crush and chaos of the Fringe was absent. We were told that it was all running at twenty percent of the usual capacity. Right now everything has an air of calm laced with a miasma of hysteria. The word “normal” has taken on the patina of deep nostalgia. We’re living in the future and it bears scant resemblance to the past. We sit in our capsule smugly double vaccinated but how long will the immunity last?

Into the sluggish city traffic we weave, the suburban foliage still summer bright, six heads nodding as the van trundles through the winding streets. Parts of Edinburgh are indistinguishable from Glasgow but much is extravagantly different from any other UK city. The castle cliffs erupt from its heart with military violence, streets plunge like rollercoaster tracks into narrow canyons, bridges flying overhead like cathedral buttresses. Arthur’s Seat sits on its rim like an urban Alp, the white parliament sunk in its lap like a lamb.

Queens Hall is frigid and sepulchral so I skive off to a café on the main drag and inhale a tea and panino. On the way back I stop into an alterations shop who’re doing a brisk sideline in face masks: tartan, polka dot and Paisley. The soundcheck threatens to be a long one. There’s a Steinway D concert grand onstage and what appears to be a glockenspiel but that might be a joke. It’s not the usual standard issue Rock set-up and I fear chaos will ensue. But this venue is a high-ceilinged church and loud Rock just won’t do here. Our replacement drummer, Jim, has had to quickly reinvent himself as a percussionist for these shows, a transition he has made elegantly. But fear stalks the group like a wolf on the edge of the forest. We are volunteering to enter the only vaguely known…

After a mercifully glitch-free soundcheck I amble to a park to sit on a sun-warmed bench affording a view of public tennis courts. Before my perch huff two of the worst middle-aged players I’ve ever seen. On reflection I realise they’re twice as good as me. Not that I’ve played for a decade, my bass player shoulder now knotted up like a twisted oak. A competent father knocks about with his novice boy in the dropping sun. The puck and patter of the balls is restful in the breeze. I have no idea what part of town I’m in. I’m killing time in the modern manner, tap-tap-tapping at my little black slab, assembled by the exploited and put to trivial purpose by we, the ignorant rich.

4 Responses to “Queens Hall Day One”