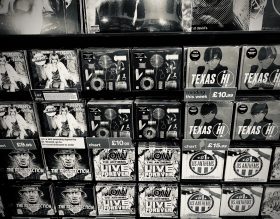 To the bathroom, to the bag, to the cab to the radio. Virgin is based way up on a high floor in what appears to be the News UK building — Rupert’s Redoubt to you and I. We are to set up in a large scalene shaped space with 240 degree views of silvery London. Below us the mud green Thames wends through the empty castles of the City, hardly a boat afloat. It’s 8:30AM and there’s not a soul upon London Bridge. It’s serene and it’s odd. We shuffle about with our leads and tuners and run through a few numbers. By the time we go live the nerves are jangling. I feel like I’m on day release from the nursing home. We used to do this stuff every day and now it’s an uneasy novelty. Our colleagues on the business side arrive for a hangout. It’s quite incredible to be in the company of those we’ve been working with for a year via video conferencing and electronic mail. I find myself staring into people’s eyes like an orphan starved of human contact. The social dimension of the work has been missed enormously. If you can call what we do “work”.

Having fumbled our way through our first task we drive across town for a social lunch with friends we’ve not seen in a year. Sitting outside eating a squid — what’s not to love? Well, the devastation of the oceans. Then onto a sort-of in-store, sort-of web thing about which we have a tenuous grasp. Banquet Records is a vinyl junkie dream space, wax piled high in volume and variety. We are to perch on a tiny stage erected behind the shop counter and, well, just BE. We play it by ear, so to speak, and leave on our feet.

I sleep like a rock for ten hours. Saturday’s onerous job is to sign the last 50 CD sleeves that Amazon screwed up. I have been coerced into forging Iain’s autograph but after several failed practice runs I opt for honesty and write a message of apology on them all instead. Same amount of ink, twice the labour — I think that’s fair.

Around lunchtime I go exploring, cutting through the soul eviscerating Westfield retail trap up through White City. I spy a patch of pitch through a side gate at QPR’s stadium and a pathetic shudder of excitement runs through my creaking legs.  Following my nose, I stroll through residential streets, observing the mean earnings of the neighbourhoods rise and fall from zone to zone. Then I cross into the Royal Borough of Kensington and Chelsea and arrive at the foot of Grenfell Tower, still stockinged in its sleeve of grey plastic. I read some of the graffiti on the hoardings and think about the dead. It’s a monument to the greatest act of corporate murder since Asbestos. And thousands of those cases remain unsettled. The poor they pay and the rich they run away.

I loop round following the turning shadows and find Holland Park Road where I know there’s a good book shop and sandwich place. As I head east I approach a traffic incident. A cop on a motorbike is holding the eastbound traffic and from a cursory glance it appears that a woman on a bike has been hit by a taxi. She’s not moving and it’s not until I weave through the rubbernecks (many of whom see fit to film) and get an outside table that the ambulance arrives. There’s a helicopter overhead which seems like overkill until I divine its mission. Down from Notting Hill Gate comes the clamour of a protest march. At first I think it’s Extinction Rebellion — faintly hippie white people in their thirties and forties — but then I start making out the placards. They’re anti-vaxxers. Or a loose conglomeration of delusional refuseniks covering a wide range of beefs. My hackles rise. These buffoons are drunk, spoilt and shouting “Freedom!” The men run the gamut of goateed, synapse-addled misfits to shaven-headed football thugs. The women look like ageing hen party outcasts who avoided the Prosecco and went straight for the Kool-Aid. They spill from the road and flow past my table, uglily berating mask-wearers on the pavement. I become angrier. Two morons in black T-Shirts promoting anti-scientific paranoia sit beside me, wilful ignorance being a tiring pursuit. Hearteningly an old guy with a couple of megaphones mounted on a trolley comes past cheerfully encouraging everyone to wear masks and socially distance. In stereo. It’s the bravest counter-demonstration I’ve ever seen. Some young Muslim women walk through the throng against the marchers’ flow, defiantly putting on their face masks. Then a fat nincompoop troops by declaring “Cockney streets for Cockney people!” What? What the fuck? When I finish my tea I walk by the accident scene. The victim is being stretchered into the ambulance. The swarm of stupidity just streams around her. I think of the medics, nurses and doctors who are waiting to treat her, suffocated in their PPE, vaccinated and Covid aware all in an effort to save her life.

A little further on I spy a line of pissing protestors irrigating a garden on a side street. A file of flaccid cocks with flabby brains.