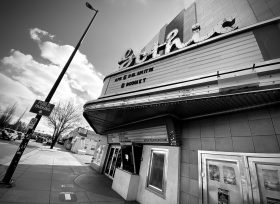 I have a rough night of it on the bus. Sleep will not swaddle me, it just claws me down  into its shallows intermittently. The bus feels like it’s one minute skidding across train tracks, the next floating on pillows of cloud. I wake in a sour mood, go marching off for breakfast which I find (like all the others of our party) within a few blocks in a traditional American diner. The Huevos Rancheros are delicious but come with an enormous slice of melon, which along with fucking strawberries is a 1980s Californian affectation that should NEVER have been adopted across this great nation. Eggs and fruit on the same plate are like biker jackets and neckties — they should never be seen together. Why would I want egg yolk on a pice of melon? In god’s name why?

One of those circular ceiling loudspeakers drizzles pop upon me; Latin, acoustic, country — all the inoffensive flavours of manufactured music you can think of. The one thing very noticeable as you leave the coast is the absence of mask wearing. There’s often a whiff of disdain when you enter places masked up. For some it’s still a political act. I completely understand middle America’s distaste for being judged by smug cosmopolitan liberals. But I don’t think I should be judged for being considerate. Bob Dylan comes on, something from his shit ‘80s period where he sounds like Daffy Duck in a fit of pique. It’s a bright blank day outside, cold enough to keep you on the hop. I deposit my $25 and take to the street.

I walk a few miles north on Broadway, the sun glinting aggressively off the six lane highway. These sprawled cities built around the automobile are extremely alienating on foot. The complete absence of street life is unsettling, yet beyond all the tinted windows and blank facades life is bubbling along — you just can’t see it. On the reverse trip I pop into Corvus Coffee Roasters. In Glasgow a roaster is an idiot but I fail to find much amusement in this. I’m just a little sick of the soullessness of these last few towns. I crave a crowded market, narrow streets, mopeds, a mob outside a pub. The last few days have been an inexorable parade of pick-up trucks sailing by in arrow straight trajectories. I sip my ethically-sourced drip coffee and poke a little vegan oat ball around a side plate. The cars brush past silently beyond the double glazing. The sun rains down, the dust lifts a touch then settles. I gaze across a parking lot on the other side of the street. The white tips of the Rockies sit stoically awake. Time for the long march back to the mothership.

Iain tips us off about a decent army surplus shop round the corner. B&B and I rummage happily among the hoodies and sweatshirts for a while before soundcheck where we find Kris proudly sporting a new leather jacket with a smile as wide as Denver itself. The Gothic Theatre is by far the best sounding room we’ve encountered so far. Warm and big like a real concert hall, it meshes our disparate frequencies together in a nice stew.

In the below stage dressing room I sit at the make-up mirror regarding my blotchy skin and drooping jowls. I was past it long ago, this offensive reflection just confirms it. What an embarrassment, what a joke. What a laugh.