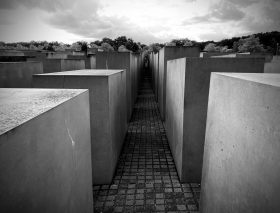 We all sleep fractiously after a late leave and a lot of stopping. I slouch off the mothership into a concrete compound containing some rubbish hoppers and a crowd of old cars waiting to be souped up or scrapped. A man is waiting to have a pile of things signed and I realise the need to perform my ablutions is too urgent to spend the first five minutes of my day scrawling my name over images of my own face. I get back to him later without remorse for my rudeness. How would you feel if there was a guy standing outside your bathroom in the morning with a pen and a copy of one of your old school photographs?

I meet a friend around two and we have a coffee before getting the U train to the Memorial For The Murdered Jews of Europe at the Brandenburg Gate. I missed this last time I was here. A field of grey concrete oblong monoliths, all of different dimensions. are laid out on a grid affording tight passage between them. The central paths take you down into the earth so the slabs begin to loom over you like a brutalist forest. I’d feel no compunction criticising such a monument in spite of its subject but it’s entirely successful as a concept. It has profound seriousness and spectacle. It’s not subtle and neither it should be. And it’s both ugly and aesthetically pleasurable in the right way. I’d like to spend more time there. When in its depths it frames the sky, making it seem itself a perpetrator.

Our stage tonight features two iron pillars making getting about a bit of an obstacle course. I find myself casually leaning on one as if waiting for a bus. The club has a tiled floor and looks like a drained swimming pool. The toilets are painted black and a pale sickly green and have pink strip lighting. It’s all a bit Nicolas Winding Refn. One senses imminent slaughter.

After the show I sign a few setlists, CD sleeves and tickets on my way out for food. I pass Mustafa’s kebab van where Andy queued for an hour and a half earlier, only just having time to scoff his food before going onstage. The line at eleven thirty looks about ten minutes long. Unless they’re yet to catch the sheep. I go next door for a Currywurst mit pommes frites, most of which I shovel down on the way back to the bus. The night has the bite of autumn now. Goodbye, Berlin.