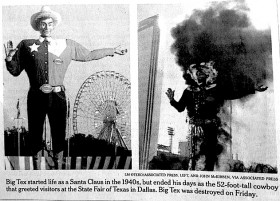 After sleeping late and patronising one of my breakfast haunts I sit down and make a playlist to take to Zilker Park for a wander. I try to find a zone in which to sun myself but am frustrated by frisbee golfers, vehicular traffic and at one point, a nest of biting ants which I manage to sit on under a convenient tree. I come up in those white bumps you get with histamine reaction like that from nettle stings. The music in the headphones maintains that pleasant sense of travelling unnoticed through the world like a movie camera, insulated and separate. Cat Power’s Manhattan with its piano octaves, drum machine and snare fills is the hit of the day. I go down to Barton Springs to watch the swimmers. I see a man in a posing pouch and man-bra strutting by below me. I bet that cunt’s here every day giving it cock-of-the-walk. I’m coming down tomorrow in a burka. The pool has a bed of mossy rocks, green and slimy-looking. I have a cold drink and daydream to the music, Dylan’s Tempest, Curt Vile’s Smoke Ring For My Halo, obsessing about production. Everyone else’s vocals sound so much better than mine, it’s terrifying. I’m paralysed with the usual insecurities. The best plan is to finish the bastard as best I’m able and then only listen to it when I’m drunk. Or driving. Or driving drunk. That usually supplies the required distance and objectivity. Sometimes things sound better from a room next door. Sometimes much worse. Sometimes things sound so unbearably awful it makes you shiver. Other times you think you’ve achieved perfection. You can think you’ve made the best record in the world and then you play it to a friend and they kind of shrug or cringe or look embarrassed. And then you feel your confidence in it shrivel. A reaction can diminish you, destroy you. I don’t play things to anyone anymore. Unless they’re drunk or driving. Or driving drunk.

The unfinished record is a curious thing. When to let it go? When to stop fiddling, decorating, adding or subtracting? The only thing that ultimately makes something finished is its release. Up to that point there are still things you can change. An earlier fade, a truncated instrumental, a shorter intro. The running order, the mastering compression, the cross-fades, the track gaps. It’s all mutable till the bastard’s in a shop. Or whatever constitutes a shop now. A guy standing behind a table with a cardboard box at the back of a gig, probably.

At sunset I drive around until I see a cheap looking Tex-Mex place on Lamar. More yellow walls with blue details. The table across from me is all Latino women and one weedy pale guy with a bad moustache. One of the women has a shaved head. You can guess the story. They are an ebullient bunch and I take succour from them. It’s a lonely life the solo artist thing. I love being alone and I crave it like sleep. But being so far from home you miss the lads-abroad dynamic of a group. You feel outnumbered and alien. You develop low level paranoia. When I was in LA for two months trying to pick up gigs in the spring of 2008 I went mildly insane. I got so bored I’d sit on the computer for hours Skype-ing anyone who’d listen to my paralytic ranting. I watched five box-sets of film noir DVDs. I stared at the guitar case and glared at the upright piano in the corner of the apartment I rented. They remained untouched. I just drove around all day exploring the stultifying nothingness that is Hollywood, Silverlake and the Strip. I found a little park by a hospital I quite liked that was raised above the boulevards. I would sit there on the grass at sunset surveying the smog like a religious hermit.

As I park outside my lodgings I notice some lights suspended high in the sky. They look very science fiction. I fantasise about an alien invasion. On further investigation I conclude that it’s a blimp. Then, a church spire lit up like a white neon rocket catches my eye. I walk to its base and crane my neck to watch a cloud of bats dipping and feinting through a swarm of insects held captive in the column of light. The night is hot, threatening. I skulk along the pitch-black sidewalks guided by porch lights set back from the road. I suddenly realise I am desperate for a beer. But beer with no company is like playing tennis without a partner. And anyway, I don’t drink when I’m recording. I haven’t had alcohol since the beginning of September. I’m jonesing, let me tell you. Man, I’m jonesing.

My suitcase is getting emptier, the bag of laundry more full. Time is winding down. I’m circling towards the drain of the long-haul, the airport that sucks you away. Home is gravity, America is outer space, the place that floats beyond limits. It is a shining beacon for so many, up there in the firmament. To me it remains surreal, exciting, frightening and impossible to fathom. A city on a hill, firing beams of light into the sky, drinking in the darkness so voraciously that it might, one day, become darkness itself.