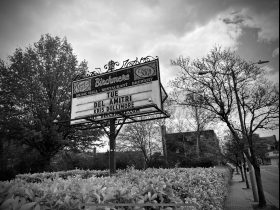 Before we leave for Alexandria at 3AM we drop into the Red Lion opposite the gig where a five piece are performing full throttle on a low stage to an empty room. We line up at the bar and lend encouragement as they motor through their tried and tested versions of Blondie, The B52’s and a song from the Rocky Fucking Horror Show. Their finale is a note for note rendition of the godawful Whole Lotta Love. I sense a meeting of minds over shots impending so make a quick dart for the door. My $7 Heineken Zero has not imbued me with the spirit of bonhomie.

Early afternoon and I’m off to Waffle Shop, an old diner offering limitless waffle experiences. I order corned beef hash and eggs over easy but I’m sternly encouraged to order house potatoes. This is all served up with a side plate of waffle so my table is entirely covered with beige food. I slather ketchup and hot sauce all over the place in an attempt to add colour. It looks like carnage in a cheap carpet factory. But it’s wonderfully comforting and the treacle-like coffee keeps coming. There’s a Telenovela playing on a small screen high above the door, the actors like cartoons of good looking people. There’s a Baywatch style sea rescue which stirs modest interest from the staff. I’m not sure what this neighbourhood is but it’s possibly Honduran. Iain thinks Salvadoran. The stats on Wikipedia back him up. The grocery stores are full of Central American wonders. There are ribbons of things in large jars that I can’t say are vegetable or animal or possible plumbing aids.

After the show I walk over a parking lot to a little door with colourful fake neon in its window. I push and it opens. I am greeted by a young, close-cropped Salvadoran man and they are open for business. This is El Pulgarcito. After our man recommends me two typical national dishes we chat while I sit and wait for my order. He served 14 years in the US infantry, though he looks barely 30. He tells me that Afghanistan opened his eyes to a completely different culture and way of thinking. “Muslims are not bad people, it’s just the churches…” He is very against Biden’s withdrawal and felt proud of the things they achieved there. He claims that the reason the people there continue to be held captive by warlords is they don’t have the desire to fight. I don’t fucking blame them, I think, but our guy is nothing if not gung-ho. He was bored shitless in Iraq because they never went beyond the compound wire. Playing cards all day and staying out of the firing line sounds good to me. But this man’s an adventurer. He approves of “the last president” but won’t mention him by name. As if, at the sound of the “T” word, I’ll have a liberal meltdown and start a protest in front of his restaurant. He has a cousin who married a Scottish guy. “You guys are pretty fucked, aren’t you?”, he asks. I mutter a vague defence and mention Johnson. He’s heard of him. “It’s not Russia, it’s China that’s the enemy. The last president knew that”. He’s not heard of the Belt and Road project. The food arrives and we say a warm goodbye. Pupusas and Filet de Carne Asada. Iain and I tuck in greedily back at the bus. The best fucking food of the tour. At ease!