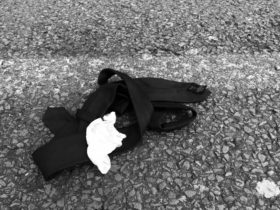 We kill time on the three hour journey answering general knowledge questions read from a little box bought in the last town. I’m surprised how much this excites me. A game! A game!
After load-in I amble out trying not to repeat the routes I’ve taken in the past. I wander into a churchyard and sit on a park bench in the sun. I’m soon joined by afternoon tipplers carrying their sad plastic bags of cheap booze. A squadron of fat flies zooms in, weaving about on the concrete path at my feet, then they’re gone – off to some more pungent shite than me. The drinkers on the next bench begin to get animated. One stands and points at the other, his bubbling language slightly urgent for a few seconds. They’re on the voddy and tonic which they mix in little cups and seem civilised, so far. Some lads in caps and Puffas fanny about with their phones while across the grass two pretty women in boots and jumpers wire into white wine from the neck of the bottle. Wulfrurians seem pretty chilled. And pretty keen to get out of it. Two cops pass through and give us all a cursory inspection. Nothing to see here, officers.
I roll into an enormous empty Boots seeking deodorant. I’m forced to ask a staff-member for directions after getting lost among the lotions. I use an automated teller to add to the alienation. It spits out my change in coppers and I curse it for the callous cunt that it is. The council have placed steel armchairs about the city and I sit in the evening warmth doing my digital duty, pecking and gesticulating at my screen like a demented conjuror.
The gig is in the raucous cavern of the Slade Rooms and the dressing room is decorated with various photographs of the band in their pomp in the seventies. I peer at a shot of Noddy, Dave, Don and Jim hanging on some Wolverhampton street corner in drainpipe jeans and leather coats. I realise they are half my age yet somehow they seem like wizened old men. It looks cold in the photograph. It’s maybe early 1971 and they’re poor, pre-success; they regard the lens with a sullen resentment. They’ve been banging away since the mid-sixties, changing name and image, grafting on the circuit. In six months time they’ll be in tartan flares and silver pant-suits, kings of British pop.
I come offstage drenched in sweat, my cheap suit blotched and limp. I don the double denim that serves as my daywear. I’m a sartorial disgrace. The charts aren’t calling, nobody’s going to number one. I sit in the van en route to the hotel with some jerk chicken, rice and peas on my knee. I’m a rockin’ OAP and I’m going home for my tea.

1 Response to “To Wolverhampton”