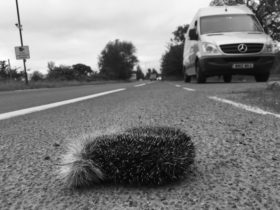 We drive through low-lying, nondescript country drenched in a fog of rain. Brake lights blink ahead and we caterpillar up to a queue. We pass a pig farm, a stately home and an enormous pink monument celebrating John Noakes. The place names are full of ‘thorpes and ‘throps. Car colours follow fashion. In the 90s they all wanted silver cars, then black in the zeroes. Now they all want white ones. I think it was red in the 80s, probably mustard in the 70s. My girlfriend’s son used to punch me in the arm when he saw a yellow car, which seemed a sensible habit.

What’s odd about gigs, you eventually realise, is this: you can be three feet away from the front row yet you and they are having utterly different experiences. What you hear and what you see is radically different. You – a few hundred peering eyes, them a few musicians and crew. You – a specific mix, completely unmusical, designed to keep you informed – them a melange of everything with added effects and the ambience of the room. You have to imagine what they are experiencing, put yourself in their place because if they were enduring what you’re enduring they’d surely ask for their money back.

We pull in to our out-of-town Express-style motel, greeted by some friendly saltiness from the women at reception.

“What kind of music is it you do?”

“We’ll GIVE you the blues”

I park my shit in my cubicle and take a dander round the neighbourhood. It’s a dispiriting march along the verges of a busy A-road. At the first roundabout I take my life in my hands and sprint across to a broad local access road which leads past upmarket country gaffs to a chi-chi stud farm. I allow a pretty brown foal to nuzzle my palm as its mother eyes me cautiously. It’s curiously touching. There’s a gently steaming mountain of hay and manure nearby above which two black shapes hover, one a bird of prey, the other a distant helicopter. Perhaps some millionaires are dropping in to give a racehorse the once-over. On the way back somebody honks and waves, presumably at me as I’m the only pedestrian for miles. I wave back – why not? I’m an ageing musician and I mean no harm.

Pocklington has been much poncified since we were last here. There is a preponderance of therapeutic outlets advertising their dubious claims and a smattering of salubrious high-end charity shops. There’s a bar with a tropical theme that has sun beds, the rates for which are posted outside on a blackboard. Some louts and their lager lovelies are hanging out there and I don’t feel they like the cut of my jib. I don’t like their training shoes. After all, surely they’ve learned to wear grown-up shoes by now. I sit in a bus shelter to get out of the light rain and send yesterday’s post up to the cloud, bits streaming to the heavenly server.

The venue is tricky for music, very dead acoustically with the audience encircling the lip of the stage in darkness. You can hear them but not see them, as if they’re behind you and you’re singing into the void. I’d warned the band about this as I had a nightmare show here ten years ago. But the crowd help – making requests and quips. So Monday is done and on we go, another little van roving about the ruins of England, plying our trade.

4 Responses to “To Pocklington”