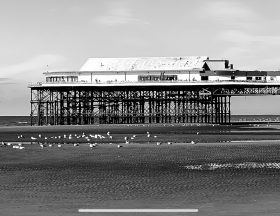 We leave at midday after a quick discussion about the set. Iain plays another Bob Dylan’s Theme Time Radio Hour episode — jail. We try and guess a few songs and come up trumps with Folsom Prison Blues which Dylan cues up first. Then  Magic Sam and Bessie Smith are calling to us over the dimming decades. It’s still pretty warm; summer is hanging in there. I look up, through pylon cables dotted with birds like notes on a stave, to a torn-up sky. The traffic pours on as relentless as the universe, every atom in constant motion.

The sun burns off the muggy canopy and the roadside woods shine emerald bright. The land is flat and nondescript, matted with fields of yellow stubble. The van grows quiet as folk nod off or caress their screens. I spot a strange vehicle perched on a steep bank undergoing construction. It looks like a four-legged spider crab clutching the earth slope. A marvellous vehicle for a wedding. I’m reduced to reading the business bollocks on the sides of commercial vehicles. Logistics, heating supplies, gardening services. The grimy economy on the move, belching and farting into a destroyed future.

In Nottingham I do the ignorant rock musician thing — go straight from soundcheck to hotel. I kid myself on it’s ok, I’ve explored the city on previous tours but I feel like a lazy tool. I nod off to a TV show about antiques. I am the old pot calling the Edwardian brass kettle black. The show goes reasonably well and I scarper back to my little room straight after. My sixth floor box has a view of Rock City and the Rescue Rooms and I watch punters filter in and out trying to remind myself what nightlife feels like.

The morning is sunny and brilliant and I gaze from my high window, watching scruffy pigeons roost on the rooftops below. On departure our tour manager informs us we are minus a rear windscreen after a small accident in the multi-storey. Mr. Fudge has done a fine job of improvising a screen using bin bags and gaffer tape. It proves remarkably resilient. On a European tour in February 1986 opening for Lloyd Cole and the Commotions our van was burgled. We put cardboard in the broken quarter-light and continued from Nice to Lyon. As we headed inland the temperature dropped rapidly. A 1.5 litre bottle of water left on the floor was frozen solid in five minutes as the freezing air flowed in from the front and sank. We had to put our feet up on the seats to avoid frostbite. Then we broke down. It was the coldest French winter in forty years. Our guitarist, Bryan and I very quickly walked the half kilometre to the nearest emergency phone. We were not dressed for the weather. We picked up the receiver, heard a human voice and shouted, Cassée! Cassée! The man at the end of the line yelled Too cold! Too cold! and we returned shivering to the vehicle where the rest of the band were starting to get very concerned. I’ve never been so freezing. Eight minutes later a local mechanic arrived in a tow truck. He probably saved our lives.

September sun bleeds over fields, the cars overtaking us make a Sci-fi sizzling sound through the bin bag curtain. We spot the top of the tower from the A-road and…Blackpool. Our hotel is crouched under “The Big One”, a jumble of twisted steel bearing screaming passengers every few minutes. My room’s AC has been set to flash freeze so I open the windows and scarper. I take to the waterline and, removing my shoes, paddle north along the sea edge, the Lake District hills lying indistinctly ahead. The vast beach is deserted in every direction. The shallow waves are warm and the sand is firm beneath my feet. It’s supremely relaxing. I wade through flocks of peevish seagulls. Gulls always look like they’re in a bad mood. Watch them — they walk away from you like they’re in a huff. I get to the tower and turn for land hoping to find some decent grub. I order a tea in a pseudo gastropub, whose toilets are so insalubrious I walk straight out. The urban snob in me is rising to Blackpool’s bait. I try to find a bit of town that isn’t Fish & Chips, Buckets & Spades, Bingo & Booze but to no avail. The further from the front you get the more depressing it is. There are a lot of fucked people here. Folk who’ve stepped out of a medieval street scene into sports casual and dirty trainers. Muscle men shouting at miniature dogs, gone-to-seed ecdysiasts, senile palmists, teenage fathers, knucklehead boozers, the lost, the fallen, the resigned. Back on the front retired couples nurse their lagers on their hotel picnic benches and soak up the rays. They’re five metres from the main road, whose traffic sweeps past with the hush/swoosh sound of a counterfeit tide. It’s godforsaken as only an English seaside town can be. The word “fun” appears everywhere. All I see is “funeral”.

Having failed to find food fit for human consumption I park myself outside the back of our hotel directly under the apex of the rollercoaster. Every eight minutes an ugly industrial ratcheting noise strikes up as a few more thrill-chasers are hauled up the rail high above me. The screams peak as the carriage plummets then fade away like dreams. I am dining at the gates of hell.

7 Responses to “To Nottingham and Blackpool”