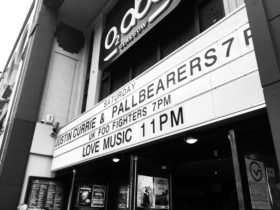 As soon as we are on the road Mr. Nisbet christens our vehicle “The Grey Toupee” after a gentleman’s club existing only in his imagination. The van is decked out in grey leather and burgundy velvet. I have taken a raised seat at the rear from where I can survey the troupe and record any encroaching bald spots on the back of their heads. So far so hirsute. The road lays out before us like a charcoal carpet welcoming us back to touring life. The air is thick with the warmth of a distant hurricane. We all begin to readjust. The initial flurry of conversation dies and we start to poke at our phones, those small furnaces of desire. I notice a turbine turning slowly on a hill like the ghost of a Spitfire. Autumn touches the tops of trees with a powdering of gold, the verges still rich and green with riotous summer growth. Pylons, roped like climbers, stretch across the moors. The dun smoke of low cloud crouches over the landscape like a threat. There is rain on the road, rain on the land and rain in the air. We live in a world of rain.

After a while a few of us succumb to the drug of sleep. Courtney Barnett and Curt Vile’s new album lulls me with its narcotic stupor. The van rocks and bounces along. I drift like a mote of dust through space. The air is turbid and damp.

At a stop we return to the van to find the battery flat. The bonnet is lifted and several men peer into the engine like surgeons over an unconscious patient. After some random prodding it restarts for no apparent reason. I decide to remain unconcerned. After all I have nothing to offer and nothing to say.
We finally edge into the haphazard red brick jungle of Manchester, gliding over green canals.

We load into the Academy in the sultry temperature, taking a vast service lift to the first floor. Once the stuff is on the stage there is oceans of time to fill. Mr. Nisbet and I saunter down Oxford Road towards town, stopping into a music shop to stare at gear with glassy-eyed boredom. The street is busy, teeming with students streaming out of classrooms into tram and train stations, pubs and cafes. Everyone looks very focussed and determined. They’re fighting for their futures.
We are to return to Glasgow after the show to save on hotels. It’s a tough job for our TM, Mr. Cassidy and a very long day for everybody. The Grey Toupee takes us away. For some reason a section of the M6 is closed and we go swerving about minor country roads for a bit. We hit some fog and are diverted through villages lying asleep like animals huddled in the dark. It’s a relief to pick up the motorway once more and gain speed. The cat’s’ eyes scroll under the tyres like an old arcade game. I listen to a bunch of Prefab Sprout. What a weird group. Gimmicky synths and easy listening chord sequences. It’s all epically romantic sentiment couched in obscure lyrics, breathily intoned. The combination is inexplicably beguiling. Like a ballet based on Coronation Street. Or a tipsy priest whispering in your ear about love, faith and contentment. I can’t help but love Paddy, Britain’s soppy pop perfectionist.

We churn on into the night waiting for Glasgow’s golden glow to light up the horizon. We’re drawn, frayed and hungry for home.