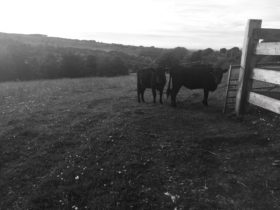 We pick up our front-of-house operator at another motorway clip-joint, finding him loitering with his bags at a mini-roundabout like a hitchhiker. We are seven, a quorum.

Pretty soon we’re in dingle/dell country, parcelled up by drystone walls running over the slopes like rock zips. The sun slices through the murk behind us briefly illuminating our world and lifting the mood. Desultory chit-chat flares up accompanied by the hiss and cough of laughter. We pull upwards to the coarseness of the moors and plateau out surrounded by low cloud which appears to be below us. An enervating heat beats on the van’s roof as the sun burns through the grey with a blowtorch ferocity. The scenery changes at every turn – barren then wooded, bleak then bucolic and suddenly we descend into the little gorge that holds Holmfirth, cradled fast in little folds of hills.

After check three of us break for the chippy. We bump into some ticket-holders and chat and pose for photographs. Very nice. It’s turned out alright again, en’t it?

We horse our repast of cod, chips and peas on the little patio outside the dressing room. An intercontinental ballistic missile flies overhead bound for Trump Tower and we sigh. Piece of cake, this.

The gig is loud. The crowd are loud, we are loud, everything’s loud. Killer venue. We mill around backstage after with various friends. As we depart each of us in turn opens the fridge and leans our head in searching for van comfort. We strip it of its valuables. A small knot of folk have waited for autographs and snapshots. We meet & greet and then we leave. We invaded, made a scene, consumed and fucked off. We’re humankind in microcosm.

1 Response to “To Holmfirth”