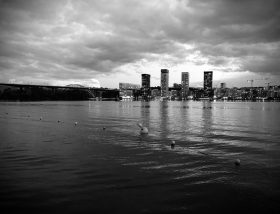 We’re late arriving after getting stuck at the Norway/Sweden border in the middle of the night due to a closed customs post. The day is gloomy and very wet. I meet a lovely music writer called Anders who is just off the plane from New York and we have a long chat about music. He tells me a little about the impending newly elected right wing government. Though the votes are still being counted, it seems certain that a coalition of wankers will take power. He mentions the word Nazi. Sweden, for Christ’s sake.

The rain eases after dinner and I have a brief gad about. The club is by a body of water called Årstaviken and the neighbourhood is a middle-class residential zone with people in puffa jackets walking ridiculous ornamental hounds, some of whom wear similar attire. Put them in a stew and be done with it. I pass a tiny bookshop holding a reading for about ten people, the host and author passing a completely unnecessary microphone between them. I climb some rough granite steps to the tall brick Högalid church, under renovation and set in pretty grounds. Later I sit by the water in Drakenbergsparken and let darkness fall around me as joggers crunch past. There are midges swarming about and I feel the odd nip. A speedboat cruises by as the blue patches of sky whiten behind ripped tissues of cloud. I hear a helicopter overhead and sail boats clinking at the quay. Darkness descends like a gloved hand. I walk out on a little pier and admire the city in the twilight. A lone duck comes quacking up like a comedy. I don’t quack back.

As I head for home a jogger pounds past me on the pier, mounts a little platform at the end and dives in. He climbs out and repeats several times. He’s a fucking lunatic. I wonder who he voted for?