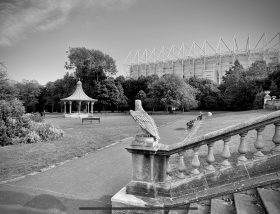 Great white letters painted on the road read THE NORTH as if it’s some mythical realm where the usual rules don’t apply. To the west I see a humpback of the Yorkshire dales, to the east the wastes of the North York moors. The A1 carves north in glinting sunlight taking us over the River Swale on to Darlington, the sky now a cloudless pale blue. We’re in Newcastle within the hour and I dump my bags in the dressing room and scramble. I follow my nose through the pleasant university campus uphill to Leazes Park which lies in the shadow of Newcastle United’s football stadium, whose white steel struts hover above the trees. I take a seat by the bandstand as two pensioners come haring past on mobility scooters blaring cheesy ska from a big PA speaker mounted on one’s rear. Well, THAT happened. I amble downhill in a vaguely Tyne direction, passing through a new university development of impressive architectural diversity and panache. Then I’m in town, a little reminiscent of Edinburgh sometimes. There’s the merest hint of the North Sea in the air. I loop back through an indoor arcade, flip through a few album sleeves and buy some shoelaces. This counts as a successful day out. The streets are busy and it’s heartwarming to see students gadding about in numbers. After check and scran I seat myself in the plush balcony of the City Hall, listening to my pre-programmed background music play through AdLib’s incredible PA. There’s not a soul in the cavernous room. Stuart, the lighting director comes out onto the stage making minor adjustments. Then the security crew fan out around the venue in yellow jackets and headsets. A guy comes over to my zone and I automatically take my feet off the seats like a cowed schoolboy. A few early punters trickle in and target their seats. They have two hours to wait. A woman holds out a freshly bought T-Shirt to inspect then folds it tidily and carefully eases it into her bag. A little gang of young folk arrive and sit in the front row of the back half of the stalls. I have no idea why they’re here — they look relatively hip, for God’s sake — but I’m hearted to see them. We shall endeavour not to blow it for them tonight as we have blown their tomorrow.

9 Responses to “Sheffield to Newcastle”