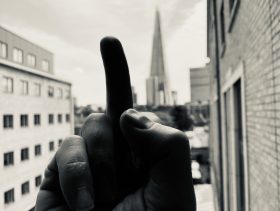 Eebs arrives at the flat at 9am and we commence loading acoustic instruments into the vehicle, which closely resembles a black hackney cab. We look forward to being hailed. For reasons nobody can fathom there’s a banjo on board. The Captain appears a little later having walked the twenty minutes from his pad to the north of the town centre, a strange hat screwed to his head like a tweed bandage. The cat slinks out to see us off. Set controls for the heart of the Smoke.

We’re bound for a London Bridge Novotel, being required to appear on Virgin Radio early in the AM. The May sun hoists itself up into the morning behind cotton clouds. London calling, goodbye Glasgow. We point the cab south and switch to cruise control and the day starts, off on a short week on the Wheel of Pain, lugging our guitars around like busker-salesmen.

Scotland has turned green since I last escaped the city a month ago and the gorse on the slopes is flowering prettily among the grass and heather. All the winter browns are mellowing, replaced by summer emeralds. The beltway is quiet, Covid persisting in its quietening effect. This country is either awakening from long hibernation or drifting into another nightmare, nobody knows. It’s like the ceasefire is holding but no one is yet ready to believe it.

The three of us chat about our itinerary, purposeful itinerants out on a little light invasion. The landscape stretches out beyond the windscreen like an invitation. The Ecclefechan turn-off appears to the left, then Eaglefield and Annan — once home to a fine-dining eatery called Del Amitri. We wonder how they’ve been coping over the Long Emergency. I see no sign of it in a quick phone search and see the Gretna wedding places posted as still closed. There must be a wedding pile-up currently, queues and waiting lists of long-postponed jamborees. Our future shows linger somewhere at the back of that queue and we watch developments with avidity.

We enter England and I notice the sudden change of nomenclature on the blue and white signs; Workington, Hexham, Newcastle, Preston; names drained of mystery and sentiment — built to describe and declare their utility but at least pronounceable. The first chain-shop services start to make themselves known as we come into the great cartel that is UK PLC. There are sheep penned by hedgerows and verdant copses — you can smell spring growth through the glass. We pass by a billboard in a field proclaiming Allah, followed by another vast poster advertising a recording studio offering “demo quality”. On we go, past lorries and caravans down to the south where power hums and the government fumbles around in the 21st century chaos.

London is terrifyingly deserted. Our cab/van eases through Highgate, Kentish Town and Camden encountering not a single rush-hour traffic jam on route to London Bridge. The roads carve through gorges of empty office developments, pavements unpopulated, pub tables sparsely filled. It’s a warm Thursday evening in May and no one’s around. We’ve never seen the capital like this in forty years of visiting. It’s like the cruise ship has run aground and everyone is in their cabins watching movies about Venice, kidding themselves on the whole voyage isn’t fucked. God knows what cities will be if we ever get out of this. London tonight feels like a museum.

We wander out in search of victuals around seven and, lo! — humans have appeared and are congregating in the mild air. Borough Market and its environs has seen a fair bit of tarting up since the bleakness of the ‘80s and we find an outdoor table at a noodle gaff, where we eat among well-to-do sorts as trains squeal and clatter on a bridge above. There are still ex-council flats here, nestling like mushrooms under the angular  forest of glass developments and it makes for a nice mix. I have no objection to gentrification so long as it’s not a cover for class cleansing. The area is urban and relaxed and I have no objections, in spite of the Glaswegian chip that still occasionally appears on my shoulder. I wake at 3AM after an anxiety dream and sit up in the darkness pondering. I run a tap and fill my vessel and consider the immediate future. Always good to know what will happen tomorrow. Always good to be far from home.

—Posted by justin in Motion-sickness
All Bilge