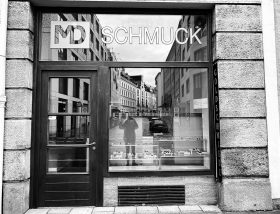 I sit in the back lounge listening to Sky and the Family Stone’s There’s a Riot Goin’ On until I’m weary enough to insert myself into my perch. The long drive rocks us through deep sleeps and we hop off the bus refreshed in the light rain. It’s Sonntag, sleepy Sunday in Bavaria. I walk over a river and pass the Deutsches Museum but don’t feel the cultural pull. As I move into town I spot much lederhosen action, unsure if this is normal. There are old guys in the full Bavarian — leather shorts, long socks, hat with feather. The younger guys wear those lapel-less Beatle jackets with their hand-tooled leather plus-fours. Women too are kitted out in Heidi-type garb. It’s like a New Romantic convention. I meander down a typical wide pedestrianised thoroughfare, all shut chain stores and lonesome pigeons. Where once hooves clopped now skinny jeans and trainers tread. The weather is against me and I feel the dressing room’s comfortable appeal.

I find out the reason for the traditional apparel from Lizzy, the promoter. It’s Oktoberfest already. I understand. This is why I heard so much English being spoken on the streets. Andy reports of having lunch in a pub full of amateur drinkers one of whom slaps a waitress on her buttocks. Come to Munich and commit sexual assault. Fuck me…

I walk into the chilly evening after a less than usually fraught soundcheck. I take a wooded path that leads down to the River Isar. The palatial state parliament building towers over me like a frowning wedding cake. I pass more monumental government buildings and the Museum of Fumf Continents. I thought there were sieben. A creeping sadness crawls through me. I don’t like endings and I don’t want to consider the future. Who does? All this wandering is the perfect distraction. Home can be such a prison.

Locals are drifting out into the twilight for food and drinks. The roads are being repaired. The river slides through the city in search of a faraway sea. Tonight we drive to the channel to go under the water, back to that grubby island, where everyone is arguing and shouting and weeping. From a continent of adults to a the realm of spoilt children. Where nobody’s listening, just gawping at the gaudy parade.