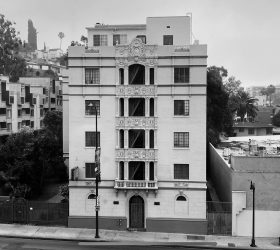 Good morning Hollywood. I crank up the window blind to a foggy scene right out of Chandler. There’s a 1940s apartment block opposite decorated in that instantly recognisable Colonial style and a few cars pass below, windows tinted as black as night. We gather in the TM’s room to have swabs taken by a gentile Latina nurse for the Kimmel Show we do on Monday. I’m glad to be starting in the west having always found the eight hour time difference easier to adapt to than the five or six. Last night I walked to a 24 hour pharmacy and stocked up on Melatonin pills. They seemed to do the trick, placebo or not, I got straight back to sleep every time I came to. Now I just feel weird, like there’s an electric current running through me but it’s a sensation I’m familiar with. It’s slow hysterical panic and you never want to be too far from a bed. Thankfully the tourbus has arrived and everyone seems genuinely excited. American tourbuses are the glamorous cousins to their European relatives. Wider and better appointed, you’re living on a luxury submarine like basement oligarchs. After taking the test I decamp back to my bed. I find myself watching a fuel depot on fire in Ukraine on CNN. The TV is enormous and I slide my eyes from the leafless winter trees of Kviv to the lush canopy of foliage around the hillside houses beyond the window and they are the same scale. They have the Oscars here tomorrow. Humanity is absurd. This is all a pitiless carnival of cruelty. Firefighters in reflective suits race in. Limousines are polished. We will be riding on a bus kitted out in fake marble and veneer.

I eke out the last few minutes of hotel room privacy watching Joe Biden make a futile speech in Poland. He’s a park bench codger railing against the way his world is going. He talks of a post-WWII rules based order as if Western Europe and the USA did not repeatedly break those rules whenever it served their interests. As if Putin gives two fucks. It’s like a priest fulminating about sin outside an enormous neon-lit brothel, gangsters stumbling out of the door drunk behind him.

It’s an hour bus ride to the Canyon Club where we take delivery of some hired backline and load in. No one knows how to switch on the stage lights so B&B (our esteemed longtime guitar techs) fumble around in head torches like a particularly poor performance by Orbital. I wander into the upmarket strip mall the venue place is situated in. There’s an airy food court next door that couldn’t be more Californian — boutiques selling artisanal trinkets, vegan versions of everything. It’s repulsively pleasant and full of the comfortable and smug. Good for them, I think. We’re all the lucky ones. I order a bagel with applied vegetable matter and take a seat in the court under an exotic tree which keeps dropping tiny seeds on me. On the balcony above I spy a shop called A Token Of advertising “Modern Lockets Made With Meaning”. This I have to see. Disappointingly they sell boring lockets on boring chains in boring colours, the meaning they’re meant to be made with inane. I go back to the venue to help with the gear set-up. It’s one of those supper club places with some long tables laid perpendicular to the stage with some round ones around the edges. There’s a raised bit at the back too. It has a vaguely fifties feel. It’s very LA. Now I have serious time to kill, the jet lag nipping at my constitution like an infestation. I find a bench outside a shop peddling overpriced bric-a-brac and stare at the pale blue sky while a speaker above emits gentle acoustic Laurel Canyon type fodder. It’s all part of the retail experience. You’re a customer. Get used to it.