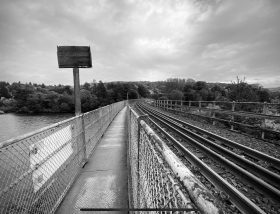 After scran I take an amble through the twilight along the river Ness. I cross a pedestrian suspension bridge, passing beautiful Georgian terraces. The riverside is admittedly pretty. I reach a playing field where battery powered floodlights are stationed around on tripods allowing kids’ football practice to continue into the night.  It looks like a scene from Field of Dreams. The tree covered hill beyond is silhouetted against the purpling sky. I can smell the fallen leaves and the verdant grass around me, there’s that distinctive autumnal tang to the air that’s been so late to arrive. A ball breaks loose from the pool of light and I boot it gently back from the darkness. It’s the first time I’ve kicked a ball since the onset of the pandemic and I experience a frisson of delight. On the way back a stranger accosts me in the dark. How can he possibly recognise me in my hat and mask? I choose to pretend to be someone else. It’s not much of a stretch.

In the morning I sit at the hotel window with a cup of PG Tips and watch a pale rainbow disappear. It’s a brooding sort of day, thick low cloud and drizzle. We head south in the direction of the Cairngorms through wooded glens and moorland. The traffic is as heavy as always on the A9, the eastern highlands’ most vital artery connecting the cities of Perth and Inverness. Oncoming lorries throw spray in our faces and the rivulets of rain crawl up the windscreen and shiver away from the wiper blades. Much of the route is highland wilderness, though more managed than it looks. The road drops down into the pretty wooded creeks along the twisting river Tay, lovely bridges floating high over the black water. The bracken is finally starting to yellow and die back at the roadsides, the vegetation losing its summer jungle exuberance. We have passed a lot of places that appear in Macbeth these last two days, Cawdor, Birnham and Dunsiname. What a great romp that play is.

At Perth I investigate three recommendations from Iain. First the art gallery next door to the venue, with its enormous canvases of local nobility in ridiculous garb, all tartan and pompous authority. There’s a lovely little bust of “Joan” by Benno Schotz from 1933 and a few cases of hilarious stuffed Scottish wildlife including a standing otter who looks like it’s waiting for a bus. Next I go to the J D Fergusson gallery which houses a pretty decent collection of the famous Scottish Colourist’s painting, sketches and a few sculptures. Some of the 1920s female nudes are a bit idealised but there is a brilliant small seascape and the modest self-portrait by the entrance is very good. But he ain’t Cézanne. I bump into Iain and he directs me to the Branklyn Garden on the other side of the Tay over a railway bridge with a pedestrian gantry alongside. It’s a pleasant walk in the light rain, leading over an island to the eastern side. The garden, once private, is now National Trust and when the friendly man at the gate asks if I’m a member I nearly throw up. Fuck me, I don’t look that old, do I? But the garden is a satisfying maze of little paths, exotic trees and quaint water features and it kills the last half hour before soundcheck perfectly. On the way back the wind picks up and I turn my coat collar up around my chin as the river slides out to the sea, black and graceful like a hymn.

6 Responses to “In Inverness to Perth”