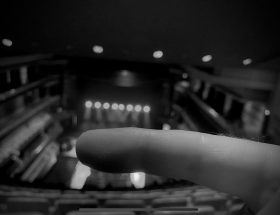 On arrival I chuck my stuff in the room and get out for a wander. I take the canal path towards Broad Street, thinking vaguely about eating something. It’s mild and dry and coming back I encounter a nice couple from Liverpool who are in town for the show and are just going out for drinks and dinner. We do an awkward semi-distanced phone snap. Someone should do a collection of these — people standing at an embarrassed distance from public faces they know. I hide in the hotel for the rest of the night, snoozing on the bed with the TV muttering quietly. The morning is heavily overcast with a stubborn haze of weak rain. I decide to loll. This is not a day to engage with the world. I plug in my audio box and browse some current pop from the stream. The Christmas meat market is hotting up with its vulgarity and grovelling. But I feel it’s good to get a flavour, like testing the tackiness of the pigment at the “wet paint” sign. Yes, just as I thought – sticky and vile. There’s a good new Aldous Harding single and something called Rozi Plain I quite like. I walk through the drizzle to the Symphony Hall blundering about utterly lost in the corridors until I happen upon the dressing room. Iain gets so lost on the way from the production office to the stage he’s fifteen minutes late for the soundcheck. The rest of us, although in the right place, are lost without him. We rehearse the epic rant of Nation Of Caners for the tenth time and for the first time I lose my place twice. The fact we manage to keep going is encouraging though we lack the balls to play it yet. I scoff some vegan scran in catering in the basement then ascend to the gods to watch the Byson Family’s soundcheck. You can hear people talking onstage up here but you can block out the sight of the whole stage with a horizontal finger. The PA gets turned up. It sounds pretty good. Two ushers enter and sweep along every row, checking every seat. I’ve not seen this before and presume it’s a security protocol. One of them tells me they’re looking for drugs and knives. Then tells me he’s joking. I decide to move forward a row lest they suspect I’m hiding a suspect device. The stewards and the support band take their leave and I’m suddenly left alone in the hushed vastness of the space.

It’s a great audience, as has been the case on Monday nights on this tour. They stand as one at the optimum moment and feedback a ton of positivity. As I’m singing and worrying I try to remind myself to enjoy the moment, playing in this big hall to so many happy faces. As soon as I do I trip over a lyric. Sometimes you have no conscious idea of what you’re supposed to be singing next and so you just pray that your lips will make the right shape from muscle memory. If that doesn’t work you find yourself rewriting lyrics on the hoof, which is always calamitous. In Dunoon I sang “powders” instead of “poison” on Scared Of Dying. I was asking myself, “Why did you do that?” for the rest of the verse. Sometimes you find your mind wandering. Ridiculous and mundane thoughts intrude and begin to tug your concentration by the sleeve down corridors and into rooms where you don’t want to be while the song desperately tries to pull you in the opposite direction. When that happens you can suddenly surface in the middle of a song with no idea where you are in the structure. You try to remember if you’ve already done chorus 2 but while you were singing chorus 1 you were thinking about one of your guests or tomorrow’s breakfast or laundry. But if you can push through all that you can attain a state of equilibrium where you’re completely inhabiting the song second by second, word by word. Things just flow. That’s where you want to be: the Goldilocks zone.

At midday, harassed by harassed cleaners I bounce down the fire escape to the waiting van. Sleep didn’t arrive until 6AM but I’ve felt worse. It’s another overcast day but dry and mild. The south coast beckons with a bright horizon. The traffic reels south like a migrating herd, consuming energy and venting gasses, pushing its pollution into the lungs of future generations. All aboard.

17 Responses to “Day Off Birmingham”