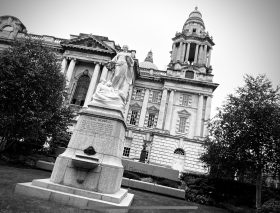 Our propeller plane glides southwest down the Firth of Clyde to land with a gentle bump at George Best Belfast City, the only airport in Europe named after a famous alcoholic. All Australian airports are named after alcoholics while most of the Caribbean ones are named after murderers. We are greeted by a friendly driver whom we follow to a minibus. There is radio news of UK PM Johnson facing a vote of confidence today and we are very quickly in town avidly spotting any obvious changes since our last visit years before the Belfast Agreement. I dump my bag in the pleasantly day lit dressing room and go abroad for a nosy. I find myself in a modern downtown sort of zone where I’m served Irish stew in a brown cardboard pot with delicious homemade bread in a lunch joint. I take a table outside in the clement air. The street life features salary boys in tight fitting suits, backpackers and medical professionals from the breast screening unit opposite. It definitely isn’t Glasgow (it’s WAY cleaner for a start). The place I’m reminded of most is London. There’s been a lot of urban tree planting in the thirty years since I last walked these roads. It all feels rather spiffing. There is quaint provincial Victorian red brick and Portland stone fortress style architecture. I see the family who sat in front of us on the plane troop across a junction with their wheelie cases rattling behind them. I smile but they don’t recognise me. A couple of guys standing by my table chat about Del Amitri and it’s a pleasure not being recognised again. After all, the last time I was here I had dark hair, dark stubble and dark sideburns. I’m now a grizzled old goat in loose-fitting denim. A charcoal Range Rover pulls a hazardous U-turn outside the clinic. Cars are now grey. So grey they’re invisible against the road. They scream “stealth wealth”. In the 1980s cars were red. In the ‘90s they went metallic silver. Then black in the zeros, white in the ‘10s and grey in the ‘20s. I have a black car I bought at the start of the zeros. I’ve never washed it so it’s usually a fashionable porridge colour so long as the rain holds off. I’m a modern man. I even use unguent on my face, though it is medicated and proscribed for athlete’s foot. I have a man-bag (otherwise known as a rucksack) and I own a bike helmet. I shop and I cook and I’m in touch with my feeling. And the feeling is rage.

I stop by a monumental municipal looking building and ask a yellow-vested steward what’s up. He tells me it’s the city hall and invites me in. “Is it pretty inside?” I ask. He assures me it is. As I tour the exhibition rooms within its ornate marbled interior I tick myself off for never having made an equivalent visit to Glasgow City Chambers. I soak up a bit of history as best I can. There is much reference to the Spanish Civil War and the usual Blitz defiance myths. Back on the street I rest my arse in a little square formed by the confluence of five narrow thoroughfares and watch a skinny twenty year old Elvis impersonator called Jelvis Pelvis who’s dressed in a white Vegas jumpsuit and £10 shades from the chemist. He’s not a bad singer but his only attempt at Elvis-ness is the outfit. Well, he throws a few shapes too. He’s being roundly ignored. I give his Hound Dog a desultory clap and am awarded with a Memphis style “Hank-yoo”. I notice his fetching white leather boots as he launches with desperate gusto into a big ballad I can’t name. The kid’s got balls. Two uniformed schoolboys stop by and are thrilled with their “Hank-yoo”s after they drop change in Jelvis’s open case. The square is suddenly busy and he gains a small audience for a sentimental love song, cheesy synthetic trumpets honking on his iPad backing track. I wander on through little zones similar to Manchester or Glasgow’s Merchant City neighbourhood, turn corners onto very Irish scenes, the green Divis hills seemingly looming at the end of the street. There are a lot of vacant retail spaces here giving the town a ghostly post-Covid atmosphere. The sun comes out and the city sparkles. Belfast is brilliant.

It’s a big Monday night singalong crowd and they carry us through our first night back with generosity and joy. The hotel is housed in an old gasworks and my room is absurdly voluminous with 12 feet high floor to ceiling curtains and enough leather upholstery to furnish three penthouses. I can see Jelvis holing up here for a mad weekend of savage hedonism, drug wraps and prostitutes strewn about the place like fur rugs. In the morning at the airport I take a stool at a window looking across the runway to the Black Mountain, richly blanketed with dense, deep green tree cover. It’s the darkest thing you can see and seems to hold a bleak secret no outsider could hope to understand.