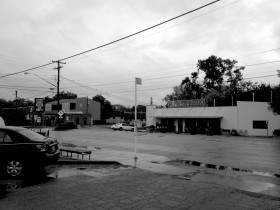 I take a walk around the little golf course in the sultry tropical morning. I’d say run, but running’s for twats and George Bush. When White-Knucklehead was in power he used to complain when he couldn’t get enough fucking running in. Like it was more important than slaughter and race-war. He just couldn’t face a long day’s killing without a jog around a ranch with his goons. Stupid little man.
I drive to south Austin to find a boot store. The last pair of cowboy boots I had were bought in El Paso, Texas in 1990. I feel I ought to make it a 22 year tradition, like acts of altruism and anal sex.
As I am scoffing breakfast at a taco trailer I hear my name shouted. I don’t turn around but years ago I would have done and have been sure it was somebody I knew. There are too many Justins now. I didn’t come across one for years and then all these little pricks started cropping up all over the shop. Not that its rarity made it any less of a wanker’s name, but now I’m in a club of wankers to which I wish I didn’t belong. Still, at least I’m not a Tarquin or a Crispin. As Frank Zappa said when quizzed about the cruelty of his kids’ names: some people call their children Ralph. When they ask your name in modern coffee outlets always say U1776A112.
The sun burns off the early canopy and begins to scorch my back. I’m in plaid cotton today, much as I would have been in 1994. I don’t feel that much older but the mirror is becoming a traitor of monstrous proportions. And somedays I wake up and shuffle, bent and twisted, to the bathroom like Grampa Simpson. I know my insides are as rotten as buried fish from all the self-medication but it’s the visible rot that’s hard to stomach.
We cut three more tracks in the afternoon fairly quickly and move on to some percussion overdubs before the drummer, Josh, has to get back to his real job with White Denim. These guys work hard, like most pro musicians. It’s difficult to make this thing pay. Songwriters are shirkers and skivers by comparison. We sit about waiting for ideas to come floating through the ether and when they hit we take all the cash. The idea is that there’s nothing without the song but you take away all those players, those arrangers and ornamentalists and the authors would be fucked. They’d be singing their stuff on street corners to shrugs and sniggers.
The next morning is still humid and rain starts to drizzle as I walk to a cafe. I take a table outside when it suddenly erupts into a mournful downpour making a wonderful sound on the awning like warm applause in a vast concert hall. A lady talking to her friend at the table next to mine starts crying, softly. She’s using the noise as cover and is seizing the opportunity, as camouflage. A little deluge laps at the edge of the patio forcing some to shuffle inwards, dragging their wrought iron chairs rattling over the concrete and sheltering their laptops. As the rain eases the lead-coloured sky is upon us like a mist. The air, decadently thick with moisture, fills my lungs like steam. The street around starts to glow in the respite, in the relief of the brief letting go.